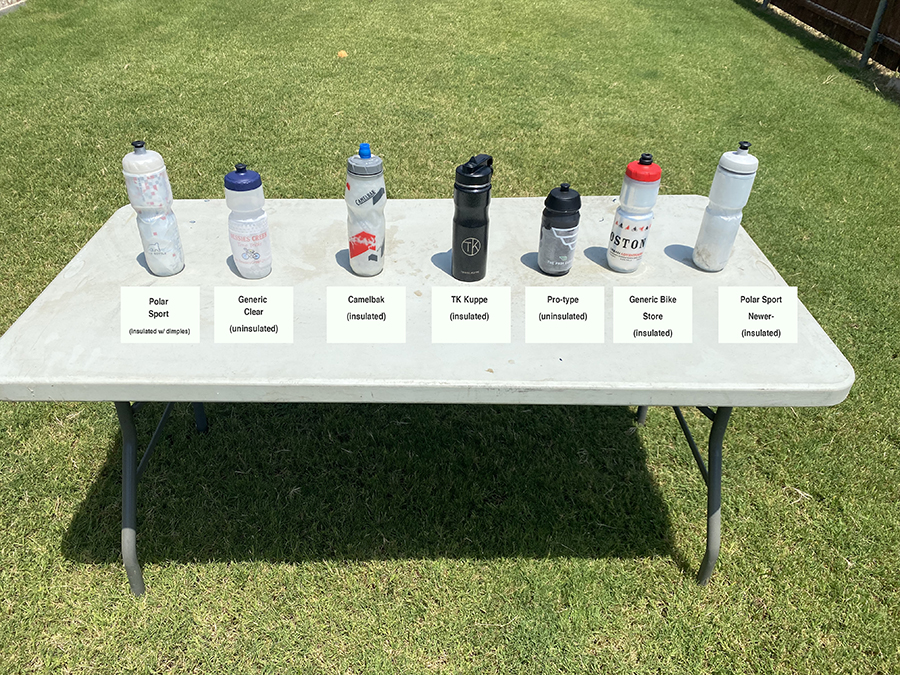 We live and ride bikes in Texas. Yes, that Texas. The one that is a summer suburb of hell, where the heat index is often 104ºF + (40ºC) and real temperatures of 100ºF (37ºC) are common. Cycling in the heat is tough. Water or hydration mixes go down better cold than hot and also play a role in lowering your core temperature.

Contents hide
1 The Test Protocols
2 The Contendors: Water Bottles We Tested
3 The Results
4 A Clear Coldest Water Bottle Winner with A Caveat
5 General Things to Note
6 Our Final Consensus

We wanted to do a comparison to find the coldest water bottle to survive cycling in extremely hot weather. No one wants to be sipping on warm hydration mixes or hot water in these high temperatures.

In our attempt to find the best cycling water bottle, here is the test we performed.

The Contendors: Water Bottles We Tested

We tested what we had in the cabinet and a few we ordered. As this wasn’t a funded-approved exercise by the Mrs., we kept it real. Still, we have a broad sampling.

A Clear Coldest Water Bottle Winner with A Caveat

As far as keeping water cold, the Travel Kuppe Vacuum Insulated Stainless Steel Cycling Sports Water Bottle destroyed the competition (that’s not an affiliate link, btw). It kept the water much colder than any competitor and the melt rate was insanely lower. It wins the best-insulated cycling water bottle award for keeping things cold.

But some points to note before you rush off and buy it:

We will probably take out the Travel Kuppe as bottle #2 on long training rides where we aren’t as weight conscious and are willing to even pull over for a bit to sip it. We may even use it in a few insanely long, hot unsupported races as long as the vertical ascent of the course isn’t crazy. For any sane race or t-shirt ride with stops, we’ll skip it. The cold water payoff is nice.

Legal disclaimer for goofballs: No, we aren’t telling you to go out and ride in 100ºF degree weather. That’s between you and your doctor.

This website uses cookies to improve your experience while you navigate through the website. Out of these cookies, the cookies that are categorized as necessary are stored on your browser as they are essential for the working of basic functionalities of the website. We also use third-party cookies that help us analyze and understand how you use this website. These cookies will be stored in your browser only with your consent. You also have the option to opt-out of these cookies. But opting out of some of these cookies may have an effect on your browsing experience.
Necessary Always Enabled
Necessary cookies are absolutely essential for the website to function properly. This category only includes cookies that ensures basic functionalities and security features of the website. These cookies do not store any personal information.
Non-necessary
Any cookies that may not be particularly necessary for the website to function and is used specifically to collect user personal data via analytics, ads, other embedded contents are termed as non-necessary cookies. It is mandatory to procure user consent prior to running these cookies on your website.
SAVE & ACCEPT